The Birth of a new Healing Art – Chiropractic

The genesis of the wellness revolution, the story of chiropractic: It was September of 1895 when a magnetic healer named Dr. D.D. Palmer examined a deaf janitor in Davenport, Iowa. Harvey Lillard, a deaf janitor who worked in the building in which D.D. Palmer practiced, described to Dr. Palmer that he lost his hearing 17 years previously while exerting himself. Mr. Lillard explained that he felt something give way in his back and immediately became deaf. Dr. Palmer examined Mr. Lillard and located a subluxated vertebra in his spine. Dr. Palmer then purposefully repositioned the vertebrae back into place and Mr. Lillard’s hearing was miraculously restored.

D.D. Palmer – The Founder of Chiropractic

”I was deaf 17 years and I expected to always remain so, for I had doctored a great deal without any benefit. I had long ago made up my mind to not take any more ear treatments, for it did me no good. Last January Dr. Palmer told me that my deafness came from an injury in my spine. This was new to me; but it is a fact that my back was injured at the time I went deaf. Dr. Palmer treated me on the spine; in two treatments I could hear quite well. That was eight months ago. My hearing remains good.” Harvey Lillard, 320 W. Eleventh St., Davenport, Iowa, (Palmer 1897).

Shortly after the Harvey Lillard case, Dr. Palmer had a patient with heart trouble that also was resolved when he replaced (adjusted) a subluxated vertebra. In this particular case, he examined the spine and located a subluxated vertebra pressing on the nerves supplying messages to the heart. Dr. Palmer reasoned that if two diseases, so different as deafness and heart trouble, came from pressure on the nerves, then other diseases may be caused due to a similar cause.

Thus, the science and art of chiropractic were formed. The dawn of a new era of health care was born, a system to investigate the cause of all disease and treat the cause, not the sign or symptom — a system based on a vitalistic approach that allowed our bodies to heal naturally without the use of toxic drugs or surgeries. 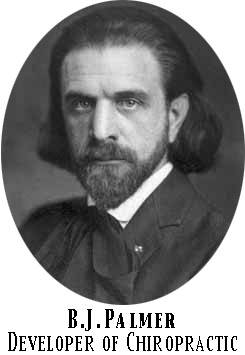 B.J. Palmer wrote over 40 volumes of books on chiropractic, developed hundreds of adjusting techniques, was the first person to x-ray a spine, and, along with Dossa Evans, developed the first chiropractic instrument that is still in use today. Simply put, B.J. Palmer was dissatisfied with average results. His life was dedicated to the pursuit of the SPECIFIC.

Gray’s Anatomy book, 28th edition, page 4: “The Nervous System (neurology) includes the Central Nervous System which is composed of the brain and spinal cord, the Peripheral Nervous System which is composed of nerves and ganglia and the Sense organs, such as the eye and ear. Its function is to control and coordinate all the other organs and structures and to relate the individual to his environment.” Scientists say that our nervous system is the most complicated electrical system in the universe.

With all of that being said, it is vital to receive the most specific scientific chiropractic adjustment possible for you and your family’s health. Since 1895, the chiropractic profession has become more and more scientifically based in regards to how correct misalignments within the spine. To read about our technique, which is the only FDA approved for chiropractic, click here